”The man who never in his mind and thoughts traveled to heaven is no artist’. William Blake (1757-1827). Through the ages, people confronted with the mysterious, creative and seemingly supernatural gifts of some unique and talented individuals have, more or less, regarded these individuals as mediators between heaven and earth. The beauty, mystery and grandness of their fruits, until today, stimulates our curiosity, stills our minds, encourages us to open our hearts, and sometimes even fill our eyes with tears. It is these qualities of art that makes the soul of the spectator merge with the soul of the artwork.

Or, as the great symbolist George Frederic Watts once said: “Profoundly deep in the human mind exists a spiritual yearning dependent on no special creed, questions by nature left without response, yearnings the most perfect knowledge of material things will never stifle. The true prophet, be his language prose or poem, art or music, can transport to regions where earth takes its place among the stars and something beyond of heaven’s infinity seems borne upon the air”. Any form of art, be it painting, poem or symphony, can be the bearer of this heavenly presence, just as any of the senses may function as a channel between this “angelic” presence and our souls. Sometimes, though, art greatly confronts us with the unexplored and hidden parts of our inner world, as if the mysterious angel has ascended from hell. It makes us realize that birth into light is sometimes preceded by descent into darkness.

The presence of this essential core in any creative expression, according to the above-mentioned words of visual magician William Blake (1757-1827), results in a piece of art in the true sense of the word. It is the secret of poetic intensity that is embedded in John William Waterhouse’s paintings; it is the presence of alienation and loneliness noticeable in Chirico’s art work; it is the enchanting beauty and power of Anton Bruckner’s great symphonies and the mystical and tender purity in ‘Gitanjali’, a collection of poems by Rabindranath Tagore. It is indeed in this sense that the artist has an almost priestly calling and, therefore, has a responsibility concerning the quality of his own life. He can only integrate and express in his work those aspects of life he knows by intuition or has actually experienced. A meditative attitude to life, in this respect, is by definition more open to the subtle whisperings of inspiration than a more superficial and outward directed life.

The art of Paul Klee (1879-1940) was also very much based on an internalized attitude to life. He once said: “It is the artist’s mission to penetrate as far as may be toward that secret ground where primal law feeds growth. Which artist would not wish to dwell at the central organ of all motion in space-time (be it the brain or the heart of creation) from which all functions derive their life? In the womb of nature, in the primal ground of creation, where the secret key to all things lies hidden? […] Our beating heart drives us downward, far down to the primal ground”. However it should be emphasized that it is not just the esoteric attitude to life which guarantees inspiring and convincing art work. Spirituality is more than esotericism. So-called esoteric art is often limited by mental processes, as a result of which art functions as a means to show off ones knowledge of symbols and books instead of revealing to the spectator a true experience of the soul. This type of art develops easily into a secret language that is only understood by initiates; a pitfall also, it seems, for many modern expressions of art. They replace universal expressiveness for a restricted elite technical jargon, and vague concepts or mental gymnastic are preferred to the natural archetypal directness of the imagination.

In a period of over twenty years I myself have become acquainted as a painter with the mystery of inspiration. Experiencing and interpreting inspiration is of course very subjective and is inextricably bound up with the unique individuality of the medium through which the creative energy finds expression. Contact with other artists, and studying the writings of artists from the past, made it clear to me that the sources of inspiration and the way in which artists express themselves, are very distinct. Nevertheless, in the domain of imaginative art, the experience of inspiration can roughly be divided into two categories: Direct visionary inspiration and gradual visionary inspiration.

The word ‘inspiration’ refers to ‘being in the spirit’. Somebody who is inspired is open to the workings of the higher mind, to the whispers of the deeper self. The visionary artist of the first category is literally taken by surprise by a wave of inner activity during the inspiration process, and receives his creative energy, all at once, in the form of images, music or ideas. Furthermore, the boundary line between the unconscious and conscious inner world of the visionary artist, generally a sensitive and intuitive person, is very thin. Most often he experiences intense dream activity and he is usually liable to mood swings. As these extreme characteristics are exceptional some contemporary visionary artists use psychedelic means, or practice mental or physical techniques to stimulate the mind.

The other variant, based on gradual inspiration, may seem less spectacular but is in fact a fascinating process where mental and spiritual operations combine. Artists belonging to this category are in the majority. In time, I have become very familiar with the inner workings of this type of inspiration and I am still able to experience this process with astonishment and sometimes with awe. Naturally, I am aware of the fact that my experience and interpretation is a subjective matter, and that as a painter, I can only operate within the boundaries that I, in a certain way, have created by personal and artistic choice. Artists with different artistic preferences will undoubtedly have their own fascinating stories.

Once I have finished a painting, I often go through a restless period in which I have to recover from my artistic adventure. Being unable to start the next project, it is a matter of time before the first gentle signs of growing inspiration announce themselves. This renewed inspiration often reveals itself to me as a vague feeling or mood rather than an image, and usually correlates with a memory or intuition. As said before, the authenticity of this first impulse is important because it is this impulse a genuine piece of art originates from. Existential anxiety and a strong sense of mortality laid the foundations for my painting ‘The discovery’. At the time, I felt physically unhealthy and mentally vulnerable. This emotional charge started to associate with an image I had of my daughter Rowanne. The inner experience and the related emotions are the essence of this phase and the strong urge to turn these emotions into an image is the power of inspiration. Or, as George Frederic Watts (1817-1904) puts it: “Perceptions and emotions are shut up within the human soul, sleeping and unconscious, until the poet or artist awakens them.”

It is this incubation period in which creative inspiration prepares the artist’s soul to the creative process. The seeds of the final work of art are planted at this stage, and nothing else will eventually give the artwork its soul and energy. Without this inspiration the term ‘art’ is not really applicable, though technically speaking the quality of the work could be outstanding. Kandinsky agrees on this subject. He once wrote that the value of an art work is not determined by quality ‘[…] on the surface, in externals, but in the root of all roots, in the mystical content of art.”In the next stage the artist searches for an image that expresses his first inspiration.

To come back to my painting  ‘The discovery’, the original emotions of existential anxiety and mortality were linked with an image I had of my daughter Rowanne. The girl in the painting derives her forceful and almost archetypal aura from this link. And the fact that she is portrayed in a deteriorating landscape enhances the effect considerably!

For me, the best way to materialize this first image, is to produce a quick charcoal drawing in gray tones and black and white contrasts. In doing so, it is important for me to resist the temptation of catching this first inspiration in a carefully worked out drawing, as most of the authentic emotions and expressive images would then be lost. The emotions need to be registered and caught during a dynamic and intense process. Usually, at this stage, I am very much emotionally charged: I am fearful of losing the essence of the emotional blueprint and I am exalted when the original inspiration becomes visible in the image I am creating. If successful, the sketch will provide a solid basis for a new inspired painting.

The next stage, applying the layer of brown and white paint, is usually about perspiration instead of inspiration. With patience and perseverance the form, that was laid down with charcoal in the first sketch is translated into a monochrome under-painting. Compared to the incubation, and drawing stage, this stage is tougher and more rational. But as soon as the first transparent layers of coloured paint are applied, the magic of the glazing process makes all remembrance of hardship disappear. At this point, the fascinating work of translating the original inspiration to its highest intensity with the help of colour, sphere and shade, begins. During this process, the creative soul will constantly be surprised by finds and effects that do not seem to derive from its own initiative and labor, but seem to have their own mysterious and transcendent origin. They almost seem to be gifts from the beyond that are handed to him during the process.

Thus, the incarnation process of the spark of inspiration into an actual work of art, develops. The presence of true inspiration, that has its origin in the mysterious inner world of man, warrants that an art work will continue to fascinate its spectators. It is a gift and a message to mankind. “Yet as long as humanity is humanity, man will yearn to ascend the heights human footsteps may not tread, and long to lift the veil that shrouds the enigma of being, and he will most prize the echo of this longing in even the incoherent expression of literature, music and art.” (George Frederic Watts). 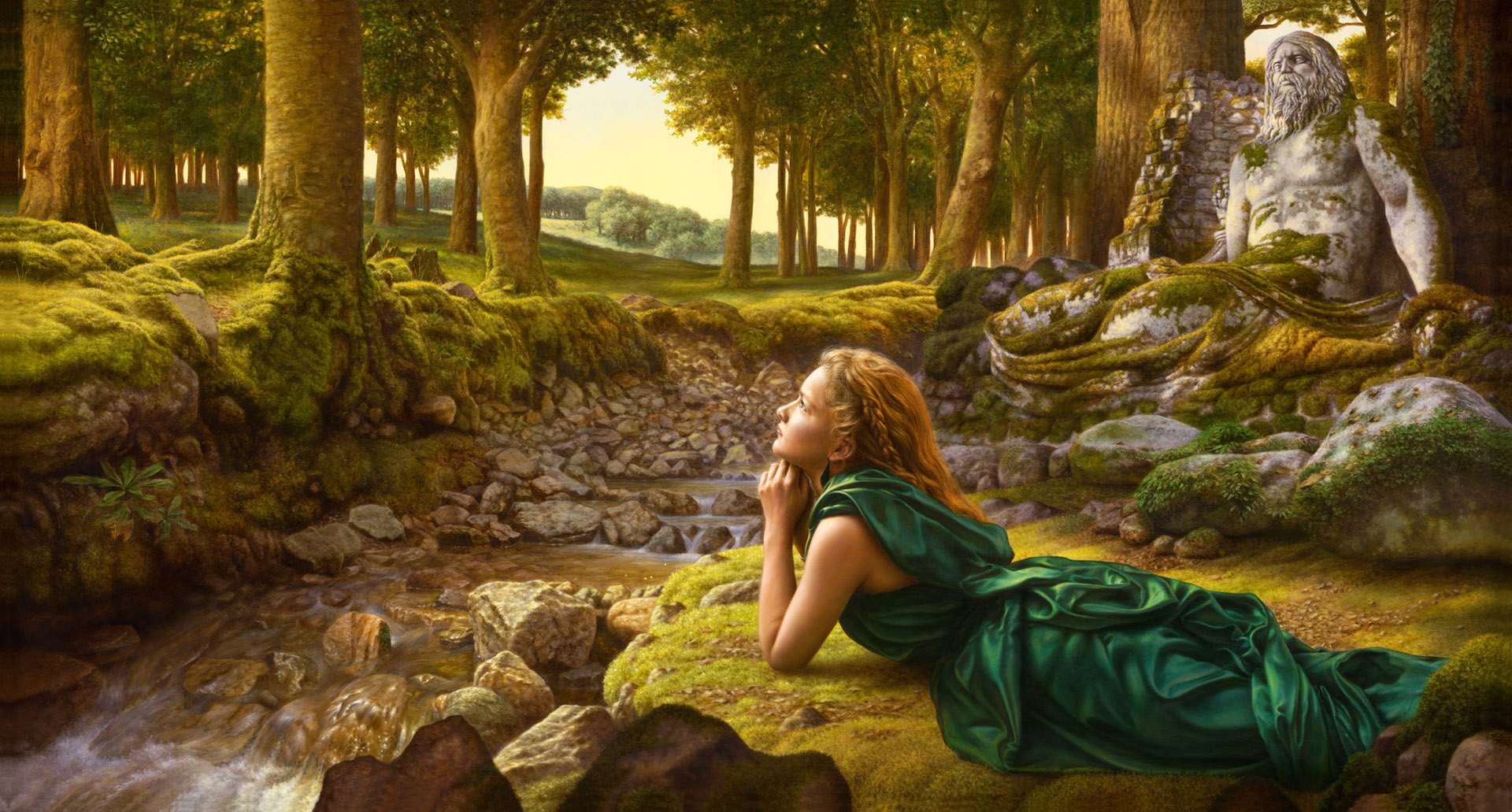 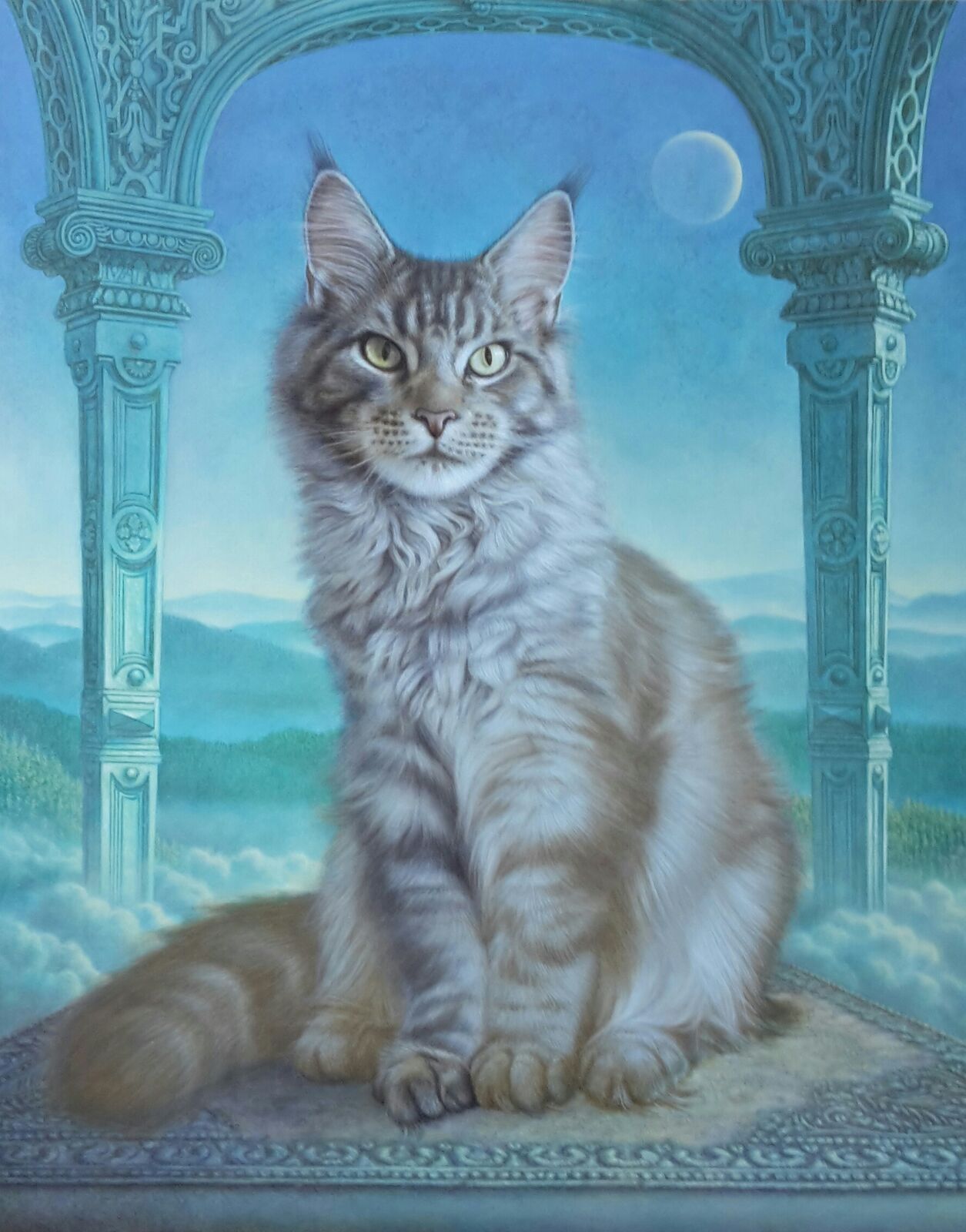 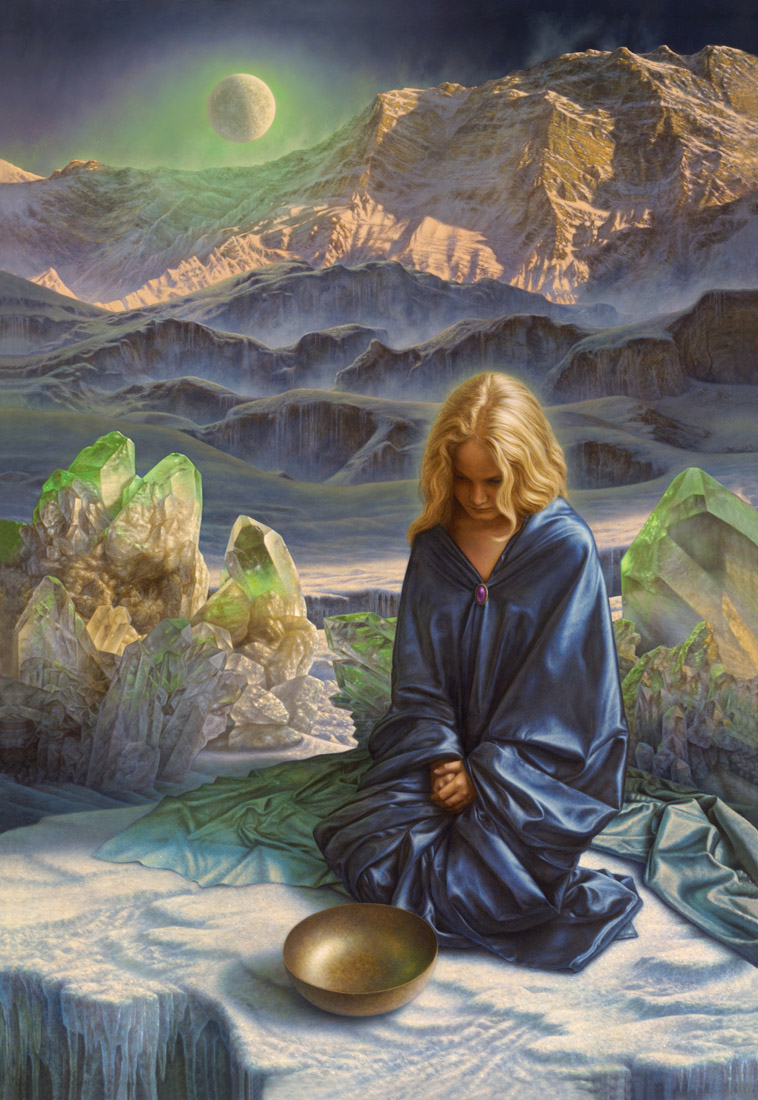