It was Gustave Courbet who introduced the style term of Realism during the Paris World Exhibition in 1855. Since then numerous movements within this framework have made their appearance. Carel Willink who was linked to the term magic realism, although he preferred to chose fantastic realism, reached back to the traditional painting  echnique and just as Johfra set the tone for many a young artist to breath new life into the old masters achievements.

It was notably Johfra who in turn made a choice for the term psychic realism, who made an overwhelming impression upon Herman Smorenburg and certainly determined  the beginning of his artistic drive. During a great review- exhibition in the Tate gallery in London he was introduced to the art of the Pre-Raphaelites, which remained a great source of  inspiration for him. In particular the craftsmanship and the poetic expressiveness of these English masters compelled his admiration.

As it has been rightly ascertained from the exhibition The Adventure of Reality  at the Kunsthal in Rotterdam (September 25th  – January 16th 2011), behind the technical refinement and virtuosity of realistic art  there usually lies hidden a social message. However, this is not the case with the paintings of Herman Smorenburg. Social problems and abuses are not to be found here. As he formulates it himself, his work points to timeless realities, to the unlimited:

“The point is to shine some light on the deepest desires and the highest ideals of man in relationship to his existence. With this I give my work direction and sense. In this respect I feel an affinity with nineteenth century romanticism and symbolism and contemporary movements such as Fantastic art and visionary realism. The worth of an art work is for me primarily determined by it’s quality and strength to effect the inner world of the beholder rather than the qualities and the characteristics of the work  itself. I see my paintings as archetypical images, as universal ‘icons’ that are for the most part unhooked from the limitations of the spirit of the age en culture. They invite the onlooker to experience the psychic power with which the image is charged. This interactive effect of the spirituality of the imagination is the deepest motivation for my being an artist.’

Herman Smorenburg was born in Alkmaar (1958). After his art study in Amsterdam, he studied the classical technique of glazing over a monochrome underground painting. This resulted in a manner of working which is characterised by great subtlety of colour effect and delicate degrees of light and shadow. His themes are determined by mythical and visionary landscapes, sometimes with architectural elements which point to a bygone era. Mainly female figures populate the world of his dreams. They invite the onlooker to step into the desolate landscapes  and to experience the silence and serenity of his dreams.

In the course of time Herman Smorenburg has succeeded in raising his technique to great perfection, which in no small way contributes to the phenomenal quality of his artistic labour.

In starting a new painting  he does not rush. In order to work out an idea he makes a preparatory drawing with charcoal and pencil. This is done on a background of rubbed out charcoal, so that he can work in a quick way with pencil and putty rubber to experiment with composition, light and dark contrasts, depth and atmosphere. The rough drawing is made quickly. In a dynamic process the emotions, which he will later integrate in his later painting, appear on the paper. In this way the original idea is, as it were, frozen. This is an exciting phase in the process of creating a painting. He is usually emotionally highly charged at this time.  The point is to record the  essence  of the emotional blueprint in the drawing. As soon as this  is successful  the foundation has been laid and he can begin on the painting.

The first phase in the development of a painting  takes the form of a detailed monochrome under painting, in which full attention is given to form and composition. Next, various transparent colour layers are applied. This is a time consuming process, in which each layer has to dry well, before another new layer can be applied. The shadows are kept as transparent and open as possible while the light areas are mostly applied in more opaque layers. In this way depth in the colouring and a play of light and dark effects is created.

Darkness and ugliness are absolutely absent. Beauty permeates every detail like a praise to creation. It is a romantic and poetic desire to make the invisible visible in this life and to reach for what seems beyond the horizon and yet is so very near. It is an expression of longing for transcendence and an attempt to touch the mystery of existence, whereby the artist feels confronted with the tension between the evanescence of all things and the tendency towards spiritual growth and liberation. In this confrontation dominates the realisation of spiritual wealth and enthusiasm. Even the reference to Die Toteninsel by Arnold Böcklin in Dreams of Evanescence bathes in beauty and visual richness.

That there is more than merely unmistakeable visual pleasure  is evident. The image carries a content of symbols that to a great extent determines its artistic expressiveness. A person will or can interpret the image in a completely personal way or perhaps the image itself will invoke its meaning in the mind of the beholder. In this way every work of art is by definition open to many possible interpretations. What the artist originally intended, is in a way even of secondary importance. Yet there is no harm in letting the artist lift the veil a little now and then, as with the following painting:

‘In the painting Whispers from Eternity a young woman symbolises the inward soul. She is enclosed by a transparent shell which, by protecting the woman’s vulnerability and inner silence against disturbing and harmful influences from the outside world, enables her to be aware of the secret messages of the world within. The hand covering her ear also indicates protection against noise and disturbances. Behind the girl is the waxing moon, the feminine symbol of receptivity and intuition; two conditions essential for opening the ‘eyes of the soul’. The young woman’s attention is directed towards her inner voice of silence, its echoes discernible in the gentle rhythms of the sea and in the unfathomable spaces behind the stars … 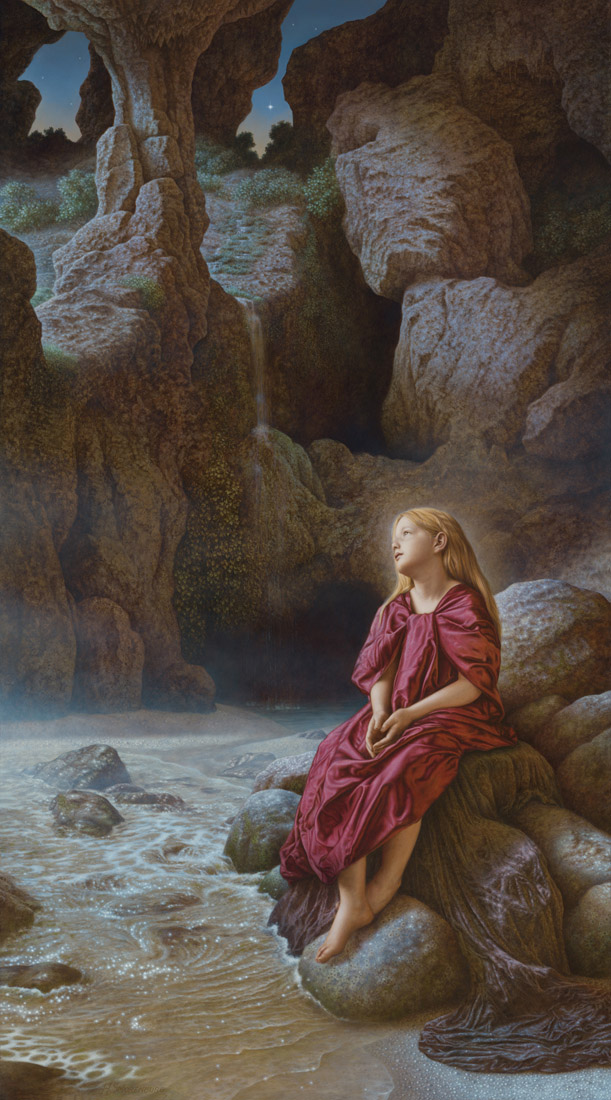